The Queen may be missing Royal Ascot for the first time in her 68-year reign but she has a winner to celebrate.

Tactical, one of several horses she owns, won the Windsor Castle Stakes to complete a double for jockey James Doyle after Lord North’s earlier win.

Lord North, a 5-1 shot trained by John Gosden, ran out an impressive winner of the Prince of Wales’ Stakes.

The meeting’s most famous patron is absent this year, like all racehorse owners, as the meeting takes place behind closed doors amid strict safety protocols because of the coronavirus pandemic.

It is understood she has been following the action at home, down the road from the Berkshire racecourse at Windsor Castle.

“It is obviously a great shame Her Majesty isn’t there to enjoy the buzz of having a runner, but she has studied every bit of it today, watching the races,” said her bloodstock adviser John Warren.

“It’s the icing on the cake to have a winner for her.

“I think the Queen, every day of her life, follows racing one way or another when she can. She will have read the Racing Post and known very well the important, fancied horses.

“She always dedicates half an hour or so to the information every day, so she’s very well tuned in and racing is her tremendous pleasure.”

It was the Queen’s 24th win at the Royal meeting and her first since Dartmouth four years ago.

Barney Roy was third, with favourite Japan fourth after emerging slowly from the stalls under Ryan Moore.

Jim Crowley is two wins clear in the jockeys’ standings after he added victory on Hukum to Tuesday’s treble and gave trainer Russian Emperor his first Royal Ascot victory.

Frankie Dettori, who clocked up a historic four-timer on this day last year, seeks a third consecutive Gold Cup win on Stradivarius, trained by John Gosden.

The official going on Thursday was good to soft after 9mm rain overnight, and any further rain could enhance the chances of second favourite Technician.

It is officially Ladies’ Day, where a crowd of more than 70,000 traditionally attends but just a few hundred people will be present this time because of coronavirus protocols. 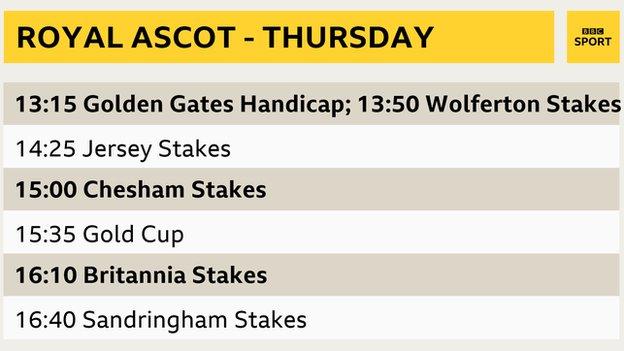 There is coverage of Royal Ascot from 14:55 to 16:20 BST on BBC Radio 5 live sports extra, with commentary on three races -including the Gold Cup – from John Hunt.